Just over 100 years ago, the City of Charleston experienced the effects of a pandemic similar to the one we are now experiencing. The first recorded case of the so-called “Spanish Flu” in the United States occurred at the Army’s Camp Funston in Kansas in March 1918.[1] The United States had just entered World War I the previous April, and the movement of troops made the virus difficult to contain. Charleston did not experience any infections during the initial springtime wave of the virus. Nevertheless, the City’s Health Officer, Dr. J. Mercier Green, stressed the need for preparedness. At an 11 June City Council meeting, Green cited the frequent movement of enlisted men to and from Charleston along with the “congestion of people and no where [sic] to take them to should they suffer from any of the transmissible diseases which may become an epidemic at any time,” as the impetus for establishment of an isolation hospital.[2]

Green’s fear of the virus spreading through military activity proved prophetic as the Navy Medical Corps identified Charleston’s first cases of influenza among sailors at the Naval Training Station on 16 September. Despite efforts to contain the outbreak, the virus soon spread to cadets of The South Carolina Military Academy (The Citadel) and Porter Military Academy, whose students both had close contact with Navy enlisted men. From there the virus spread into Charleston proper.[3]

During the early days of the outbreak, officials downplayed the seriousness of the situation and urged citizens to remain calm. Green explained, “the ‘Spanish Influenza’ or ‘Flu’ is nothing worse than the common, or war garden variety of the grippe.” Meanwhile, Navy administrators claimed the “seriousness of the siege here has been greatly exaggerated.” They warned, “rumors and false reports about the epidemic are far more damaging to the morale of the men in camp and to the spirit of the folks at home than is the d 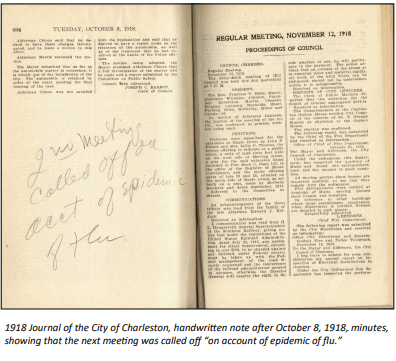 On October 3, an estimated 15,000-20,000 men, women, and children participated in the Liberty Loan Parade to raise money for the war effort. The procession, led by Mayor Hyde and City Council members, marched up Meeting Street to Marion Square where they held a pageant viewed by Governor Richard L. Manning along with a long line of top military brass. Following the pageant, the parade continued to Cannon Street with sidewalks “jammed with spectators, many thousands of people being gathered to watch the marching throng.”[5]

Two days after the parade, the Board of Health issued an order closing all churches, theaters, lodges, and schools. The order banned all private gatherings and social situations and instructed businesses to guard against overcrowding. Undoubtedly, the great throngs of people engaged in the parade contributed to the virus’ rapid spread, which effected all levels of society including those in the seat of power. At the 8 October City Council meeting four aldermen were absent due to illness including Edward J. Riddock, who died of influenza on 11 October. Despite the seriousness of the situation, the war effort outweighed any concern for public health. Green urged citizens to continue to attend meetings for the Liberty Loan drive. Although “we may contract influenza,” he wrote, “we shall have done so in a splendid cause. We shall have helped our Uncle Sam win the war.”[6]

The deployment of many nurses and doctors to Europe during the war resulted in a shortage of medical personnel, which compounded the problem. In total, physicians reported 7,125 cases during the initial fall outbreak that lasted from September through November of 1918, although Green believed the true number of cases to be between 15,000 and 18,000 owing to the scarcity of healthcare professionals that left many to fend for themselves without seeking medical attention. The virus returned in January 1919, resulting in a further 9,371 cases and returned once more the following year in January 2020 resulting in 3,639 cases before virtually disappearing.[7]

Curiously, the City of Charleston holds few documents relevant to the City’s effort to fight the influenza pandemic. Reports of the City Health Officer printed in City Yearbooks and a few comments in City Journals offer the only insight available in the City’s records repository. Even within a small collection of papers relating to the City Board of Health transferred to the Charleston County Public Library in 2002, there is little to no information on the influenza pandemic of 1918.

[1] Epidemiologists hold differing theories on where the 1918 influenza pandemic began. As a neutral country during World War I, Spain did not engage in the same wartime censorship that other countries did. Spanish newspapers reported extensively on the influenza outbreak and the influenza of 1918 came to be known as the “Spanish Flu.” For further discussion see: Mamelund, Svenn-Erik, “Profiling a Pandemic,” Natural History 128, no. 8 (2020), 16. Also see: Barry, John M., “The Site of Origin of the 1918 Influenza Pandemic and its Public Health Implications,” Journal of Translational Medicine 2 (2004), 3.